For any city to develop, it is important that they have an effective transport system. Being a popular religious tourist destination and one of the busiest industrial cities in the state of Karnataka, Tumkur has an efficient transport system via road, rail, bus and air to make traveling within and to the city much easier. 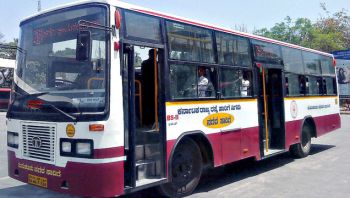 Traveling by Bus and Road

The Karnataka State Road Transport Corporation (KSRTC) has a divisional office in Tumkur, which connects the city with other major cities like Bangalore. KSRTC successfully launched the bus service in Tumkur on Feburary 18, 2011 with around 50 buses running throughout the Tumkur district. A survey shows that around 60% of the population travel by two wheeler motors, making it the most preferred mode of transportation in the district, which is followed by KSRTC buses and Auto Rickshaw with a share of 17%. On an average 1200 persons per bus per day use the KSRTC bus service daily in Tumkur. Two major highways connect Bangalore and tumkur; NH 4 and NH 206.

The railway system of Tumkur plays a major role in increasing the connectivity of tumkur with other major cities of the country. The railway structure of Tumkur comes under the South Western Railway Zone of India and has also been refurbished last year. There is a direct train service between Tumkur and Bangalore. The details are as follows:

The nearest airport from Tumkur City is the Bengaluru International Airport (BIA), which is roughly 67 kms from Tumkur. BIA is one the busiest airports in the country and connects all major flights to the rest of the country and world. Other airports near to Tumkur are Mysore Airport (125 kms), Salem Airport (220 kms) and Bajpe Airport, Mangalore (243 kms).

The nearest port to Tumkur city is the Mangalore Port, which is situated 305 kms from Tumkur and has a cargo capacity of 44 million tonnes.