An Effective transport system is essential for any city to thrive and therefore, on February 2011, the home and transport minister launched the bus system in Tumkur. The services were initially limited to only a few routes, which was later expanded to other parts of the district as well by June 2011. According to a survey, around 15 lakh passengers travel each month in the city by buses.

The main mission of Karnataka State Road Transport Corporation was to provide economical, adequate and efficient transportation throughout the state of Karnataka. Established in 1961 under the provisions of Road Transport Corporation Act 1950, KSRTC was formed to provide safe and reliable transport to all the passengers in the state. KSRTC operated through three corporations in the state, namely, BMTC (Bangalore, 1997), NWKRTC (Hubli, 1997) and NEKRTC (Gulburga, 2000). 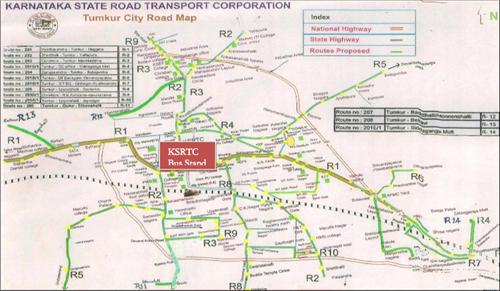