Tumakuru, commonly known as Tumkur, is a small industrial city about 70 km from Bangalore, the capital city of Karnataka. It is also known as the ‘Coconut City’ due to numerous palm trees found in this town. Not only does it consist of some major industrial companies such as WIPRO, TVS Electronics and System Consultant Confirmation of India; but is also involved in production of rough cotton, blankets, watches and ropes. In 2011, Tumkur city was accorded as the corporation city of Kartnataka.

Tumkur is located northwest of Bangalore at an elevation of 2696 feet or 822 meters. It is a part of the Tumkur district with its ten talukas namely, Tumkur, Sira, Turuvakere, Kunigal, Tiptur, Madhugiri, Koratgere, Chikkanayakanahalli, Gubbi and Pavagada, with its district headquarters in Tumkur City. Each district consists of one or two cities, a small number of towns and numerous villages. The Tumkur District, an area of 10,598 square kilometers, is bounded by Mandhya district from the South side, Chikkamangalore from the north east side, Chitradurga and Hassan district from the west side and Ananthapura (district belonging to Andhra Pradesh) from the southeast side.
With a latitude of 13.340 N and Longitude of 77.10 E, Tumkur City is the largest city in Tumkur District, which is fourth largest district in India and has a population of 26,81,449 according to Census of 2011 while Tumkur city has a population of 5,16,661. Tumkur has a sex ratio of 984 to 1000 (female to male) and a literacy rate of 75.14%.

With its various religious temples, forts and monuments such as Goravanahalli Lakshmi Temple, Chenna Keshava Temple, Devarayna Durga, Pavgada Fort, Arlaguppe each filled with divine stories. Whether you are looking for a religious pilgrimage or an adventure, Tumkur is the place to be this year.

Origin of the name 'Tumkur'

Tumkur is derived from the word Tumakuru that is itself a derivative of Tummeguru, which is the original name of the city. It has been said that the word Tumakuru is a derived from ‘Tumbe Ooru’ because of the profusion of a flower called ‘Tumbe Huuvu’ or because of a famous folk musical instrument belonging to the city called ‘Tamate Ooru’. Another story relating to the name is that since Tumakuru is at an elevation, during the governance of Cholas, the soldiers used to stand at the hills with an instrument called Tumaki to alert the people in the city of any eminent danger, hence the name Tumakuru.

Tumkur as a Tourist Destination

A popular tourist destination, Tumkur is famous for its various religious sites and is a short drive to one of the most famous temples of Karnataka, Goravanahalli Mahalakshmi Temple. It is said that Tumkur is the town where Lord Ram and Sita rested during their journey back from Lanka. A land filled with scenic beauty and a picturesque countryside, filled with historic temples and landmarks, Tumkur surely has something to offer for everyone. 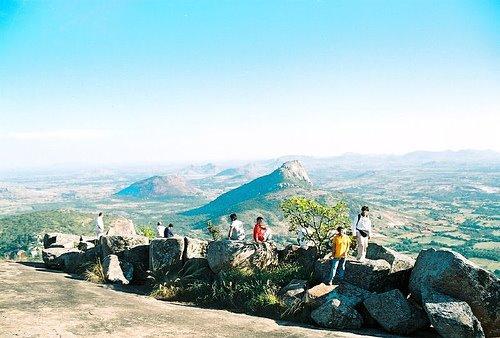 Surrounded by hills and river valleys, the city is known for its natural beauty and beautiful country side. Pavgade Fort, Arlaguppe temple, Laxmi Narasimha Swami Temple, Sri Siddaganga Mutt, Goravanahalli Temple are just few of the many religious destinations in and around the city.

The Shivaganga Hill, a famous tourist spot, is just a few kilometers from Tumkur City, is a very popular rest stop among people on religious pilgrimage. It is also one of the most renowned tourist destination in Karnataka with many different adventurous activities such as trekking on steep inclines and boating at the Marconahalli Dam are some things that make the city more interesting.

With an area of 48.60 sq km, Tumkur has many famous areas within the city, which are very popular among tourists. For instance, the BH Road consists of a number of south Indian restaurants, budget hotels, coffee shops, movie theaters, chemist and garment shops. It is the central most road in the city and is also a short distance from the railway station in Tumkur. Another popular road is the Vivekananda Road (previously known as Shirani Road), which is home to many banks, bars, clinics and local restaurants.

Tumkur also has some old areas such as Gandhi Nagar, SS Puram, Barline, MG Road, Melekote, Kyatasandra, Upparhalli Gate and Arlepet. The famous Sri Siddartha Institute of Technology is situated on the Kunigal Road of Tumkur.

Since it is a famous religious destination, Tumkur has a number of medium to low budget hotels. Some of the best hotels that provide spacious rooms, comfortable beds and good room service are Naveen regency Hotel (Mahalaxmi Nagar), Vaishali Comforts (B.H. Road), Woodlands Hotel (Batawadi), Najundeshwara Hotel (Railway Station Road) and Hotel Vyshak International (Subbaiah Road). All these roads are central and can be reached easily by a cab or bus.

Pongal is one of the most anticipated festival in Tumkur and for rest of the state that comes around mid January. Preparations for Pongal start weeks ahead of the festival. A sweet dish made out of rice is made during the festival and is dedicated to God of the Sun or God Surya.

Ganesh Chaturthi or Ganesh Festival comes between the months of August and September. It is one of the most celebrated festivals in not only Tumkur but Karnataka and the neighboring states as well. This festival is dedicated to Lord Ganesh and is celebrated with lot of pleasure and fun.

Tumkur is easily accessible by car, bus and train from Bangalore. Direct buses and trains are available from the capital city. The cab does not cost more than Rs. 50 depending upon the size and type of the car and there are plenty of rest stops available in between. Tumkur can also be reached by air. The nearest airport to the city is Bengaluru International Airport, roughly one hour and thrity minutes from Tumkur.

Tumkur is also very well connected by buses and cabs. Around 50 buses travel within the city, day and night, due to the facilities provided by Karnataka State Road Transport Corporation (KSRTC), which has a divisional office in the city.

Best time to visit Tumkur is during winters, between October and March, when the city is not too hot and looks beautifully washed from the rains. Summers in Tumkur can become very hot, up to 400 C and that is why, Tumkur is generally avoided by tourists during this season. Summers usually start in the month of March and are continues till the month of June.

Tumkur receives heavy rainfall during the month of August and September, roughly around 1000 mm per year.  The perfect time to visit Tumkur is during winters when the rains have just finished leaving the city and beautiful and serene. The lowest temperature in Tumkur is around 160 C and the coldest month is December.

Facts and Figures about Tumkur